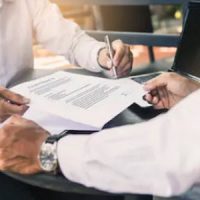 Generally, business contracts (and other contracts) are drafted with an eye towards anticipating as many potential future concerns and considerations as possible, and providing for them. One concern or consideration that is often addressed in a contract is how and where future disputes between the parties will be resolved. Examples of contractual clauses that relate to the “how” issue are clauses that provide for mediation or arbitration (as opposed to litigation) and clauses that provide for the payment of attorneys’ fees. Among clauses that relate to the “where” issue are forum selection clauses.

What is a Forum Selection Clause?

Generally, a forum selection clause in a contract is an agreement by the parties to have future disputes determined by a particular court, often in a particular location.

The language of such a clause might provide, for example, that any and all disputes to that arise out of the parties’ contract or agreement will be brought, by either party, in a particular federal court within a state (assuming what is known as federal court subject matter jurisdiction exists) or, alternatively, in a particular state court (if federal court subject matter jurisdiction is lacking) in that state. This was the type of forum selection clause recently reviewed by the Eleventh Circuit Court of Appeals in  DeRoy v. Carnival Corp.

In this case, the plaintiff asserted that while a passenger on the defendant’s cruise ship, she tripped on carpeting and broke her foot. A forum selection clause contained in her cruise ticket provided that any action arising out of the contract (ticket) or cruise would be litigated in federal court (the United States District Court for the Southern District of Florida in Miami) or, if the federal court lacked subject matter jurisdiction over the lawsuit, in state court (located in Miami-Dade County).

The plaintiff in DeRoy v. Carnival Corp. apparently preferred to have her case proceed in state court. Therefore, and according to the Eleventh Circuit Court of Appeals decision, her strategy was to purposefully refuse to invoke the federal district court’s admiralty (federal) jurisdiction. She did so by filing two simultaneous lawsuits – one in federal court and one in state court. Her federal court complaint was focused on why the federal district court lacked subject matter jurisdiction, according to the appellate court’s decision.

As this case evidences, contracting parties should understand the effect of forum selection clauses, and other common contractual clauses, that may govern their future rights. For more information about such clauses, contact the Fort Lauderdale business lawyers at Sweeney Law, P.A.