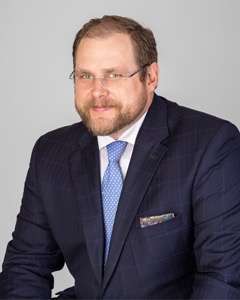 Brendan A. Sweeney, Esq., is the founding partner and driving force behind Sweeney Law, P.A. He focuses his practice on business, consumer, construction, real estate law, and Title III-ADA litigation, and brings a great deal of experience to the table.

Attorney Sweeney started out his career as a trial attorney representing the state of Florida in criminal matters as an Assistant State Attorney for the Fourth Judicial Court of Florida. Subsequently, he moved on to gain a deep understanding of real estate law and civil litigation while practicing with large international and national law firms representing the world’s largest financial institutions.

Leadership is not something that is new to Brendan. At his previous firm, he directed and trained a group of junior associates that were responsible for the prosecution and defense of real property and consumer related claims throughout the state of Florida. Brendan is also a LEED-AP Building Design and Construction (LEED BD+C) accredited attorney. He has counseled clients on construction law issues such as state and federal procurement requirements, construction lien negotiations, construction defect claims, bid disputes, and payment and performance bond claims.

Brendan continues to distinguish himself on an ongoing basis, and the legal community has been taking notice for years. He was named as a Florida Legal Elite Up and Comer in 2014 and 2015, and he has also been identified as a Florida Super Lawyer Rising Star in 2014, 2015, and 2016. Brendan is a member of the Florida Bar and the Maryland Bar, and he serves on a number of different relevant American Bar Association and Florida Bar committees. Just recently Brendan was appointed by the Florida Bar to serve a three year term on the prestigious standing committee on the Unlicensed Practice of Law.

As a community minded person, Brendan regularly appears in court at shelter hearings as a pro bono attorney for the Guardian Ad Litem of Broward County. Additionally, Attorney Sweeney is a graduate of Leadership Broward Class of XXXIV where he served as a Chairperson for the awareness campaign of a local non-profit organization.

As you can see, when you work with Sweeney Law, you are going to be represented by an attorney who has a great deal of experience, sophistication, and has a proven track record of leadership throughout the community. At Sweeney Law, P.A. we make each and every one of our clients a priority. You get the personal, one-on-one attention you deserve when you retain our services.