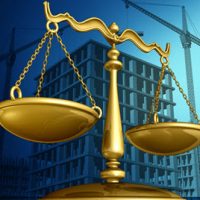 How often has this happened: You discuss a construction project. You talk about, and perhaps agree on, all the details. You then get a written agreement, and execute it. Later it turns out that a lot of the things you discussed never made it into the contract. Are those discussions, which were made before the contracts were executed, but aren’t written into the contract, enforceable?

The answer is generally no. The parol evidence rule prohibits enforcement of any representations, promises, or agreements made verbally, before a writing is executed, if those agreements aren’t in the writing itself. The law assumes that the parties voluntarily left the pre-contractual verbal representations out of the agreement.

There are very limited exceptions to the rule, which will allow the pre-contractual understandings of the parties to be considered by a court. One is where the written terms of an agreement are ambiguous. This usually happens when the language of a written agreement can reasonably be interpreted two different ways.

Sometimes, the terms themselves as written can be confusing or ambiguous or internally contradictory. For example, language may be defined one way in an agreement, and in a different way somewhere else in the same agreement.

Other times, the language itself is clear, but something happens, or external evidence is revealed, that makes the otherwise clear language of a contract ambiguous. For example, if a contract said that a “disaster” excused performance, that language may be clear, but it may be unclear whether a riot, civil unrest, locusts, hail or any other number of “disasters” are the kind of disaster covered under the contract.

Where a contract is ambiguous, or capable of multiple interpretations, the court can consider pre-contractual discussions, to clarify what the contract means or was supposed to mean.

Sometimes, pre-contractual discussions can be admitted as evidence to prove fraud in the inducement of the contract—in other words, that one party lied to the other to convince the other party to sign the agreement.

Information That’s Left Out of an Agreement

This usually happens where vital terms to the contract are left out. To use a very obvious (and hopefully infrequent) example, imagine you agreed to a construction contract where the parties never included a completion date.

Obviously, a construction contract needs a completion date. In the absence of this vital part of the contract, the parties can admit evidence as to what their pre-contractual understanding was concerning the completion date.