Using The Frustration Of Purpose Defense In Your Construction Law Cases 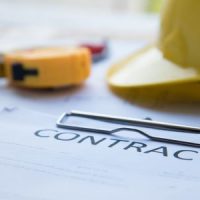 Sometimes, it becomes impossible to perform or live up to your obligations under a contract. For example, you contract to build on land, and later it turns out that land is environmentally protected. But other times, it is possible to build the project and comply with the contract, it’s just that the entire underlying point and purpose of entering into the contract is gone. That’s called frustration of purpose, and it is a valid defense in Florida courts to a breach of contract action.

Examples of Frustration of Purpose

A good example of frustration of purpose might be the pandemic. Assume that a builder contracted to build a nightclub for a building owner. The contract could still be performed—the materials and workers are there, and the contractor can build the property—it’s just that from the owner’s standpoint, the entire purpose of the contract has been frustrated, as nightclubs are (or at one time, were), not allowed to operate.

Another example might be if a company were contracted to build an airport. Later, a local ordinance was passed, restricting noise levels in the surrounding neighborhood. The airport could still be built, but it would have to be so limited, and would only be able to access such a small number of planes to comply with the ordinance, that the owner would not be able to receive everything that it had anticipated receiving when the contract was entered into.

One difficulty in asserting frustration of purpose is that the thing that is causing the frustration—that which prevents a party from getting what it bargained for—must have been unforeseen when the contract was formed. Otherwise, a court will say that it could have been dealt with in the contract, but the parties voluntarily opted not to do so.

With anticipated or foreseeable events, courts will assume that parties could have protected themselves by including relevant contractual language.

Contract Can Still be Performed

Notice that in our examples, there is no difficulty in performing the terms of the contract. The nightclub or the airport, in our examples above, can still be built, on time, to specifications. It’s just that the underlying purpose for the contract has now been frustrated.

The frustration must be significant enough to make non-performance excusable. If a job is simply more expensive to complete, or more difficult, or an owner won’t realize as much profit as he or she thought he would, that will not be enough for frustration of purpose.

The party seeking to use frustration of purpose, must demonstrate damages—that is, the losses that it would incur, that it didn’t think it would incur when the contract was entered into. Those losses will have to be significant to support the defense.

Questions about defenses to a breach of a construction law contract? Call our Fort Lauderdale construction attorneys at Sweeney Law P.A. at 954 440-3993 for help today.