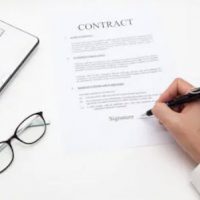 Often, the things that make sense in our heads, or things that we think, don’t make it onto paper the way we intended. Or, sometimes the world just isn’t what we thought it was. Mistakes happen, we’re all human and the world changes without notice. But what happens when you make a mistake about what a contract means? Or if there is a mistake in some contractual term that causes the construction contract to be different than what you thought and intended it to be?

When there is a true mistake in something that makes it into a contract, or someone was in error about what a contract means, the court can be asked to reform the contract.

As you can imagine, this is not easy to do—courts don’t like changing around the terms that parties have previously agreed to. And, if someone could just say “I made a mistake” and get out of a contract, no contract, construction or otherwise, would have much effect, force, or power.

But the law does give courts the power to re-write or reform an agreement, so that it reflects the true parties intentions when the contract was entered into.

The easiest situation is when both parties were mistaken. As a simple example, imagine that you contract with me to build a structure on your land. Later, we both find out that because of environmental regulations, it is illegal to build anything on that land. Neither of us knew this at the time the contract was made.

We both made a mistake, and the court can either void the contract, or reform its terms, to reflect a different area for me to build the structure.

A contract can be completely rescinded, if neither party was, by the terms of the contract, responsible for the error. But that’s not the case when a party is aware that he or she has limited knowledge with respect to facts, but relies on his or her knowledge anyway when the contract was formed.

For example, nobody could have predicted the coronavirus. Yet, we all know that anything can happen, and thus, the pandemic is usually not a basis for a mistake that would reform a contract.

Things get much more difficult when one party makes a mistake-called a unilateral error or mistake. The party that didn’t make a mistake, should not be punished by the other parties’ error. When it comes to unilateral mistakes, courts generally will not allow reformation, unless the error is caused by some bad act by the other side.

To show reformation, courts will require proof by clear and convincing evidence, a standard higher than the ordinary civil standard. Courts care careful not to use reformation as a way to let a party out of a bad bargain that they made.