Does An Arbitration Clause Bind Subsequent Owners Of Property? 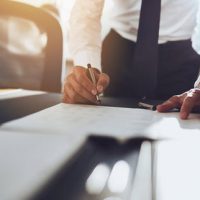 In many contracts to build homes, or in contracts between developers, contractors and owners, there are arbitration clauses. Your position on arbitration clauses will largely depend on who you are; owners and individuals tend to disfavor them and see them as being “anti-consumer,” while companies or developers tend to like them and see them as a way of mitigating legal risk and lowering the costs of litigation.

But one thing is for certain: Whether you like or you don’t like arbitration, you will have to sign an agreement saying that you agree to arbitrate any disputes that may arise between the parties to the contract.

Or is that so certain? Can you be compelled to arbitrate a dispute, even though you never contractually agreed to do so? There may be a situation where just that can happen.

The fact pattern of the recent case, is one that could happen other times, and likely does.

A developer and an owner had a construction contract and deed that required arbitration of any disputes or construction defect claims. The deed did say that the arbitration clause would apply to and bind any subsequent owners of the property.

The property owner then sold the home to a new owner, who of course, never signed any contract with the original developer. A defect in the home was found, and the new owner sued the developer.

The court said that the arbitration clause could be enforced against the new owners, because it ran with the land. A covenant that runs with the land will “travel” with the land, and bind any subsequent purchasers.

There are covenants that run with the land, but also personal covenants, which are personal to the owner, and thus, do not bind subsequent owners of the land, the way a covenant that runs with the land would do.

The Court also noted that the arbitration clause was in the deed, a publicly recorded document. As such, the new owners knew or should have known about the requirement to arbitrate, simply based on an examination of the public records.

Putting Covenants in the Deed

The case is  a lesson for developers: If you want to ensure the right to arbitration, or any other type of restriction that you want to place on an owner, to bind subsequent owners, the covenant, restriction or requirement, should be in the deed, which is filed in the public records.

Call our Fort Lauderdale business lawyers at Sweeney Law P.A. at 954 440-3993 to help your business or construction company should you have any legal problems.