Breach of Contract Under the UCC 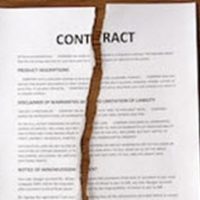 What is Breach According to UCC Rules

Unlike a traditional contract, breach under the UCC rules differs. In a traditional context, breach is when a specific term in the contract is not performed or a condition is not met.  As a result, breach in the traditional sense is narrowly defined and a claim for breach of contract is usually one of the few ways to gain remedy from a breach. However, under UCC rules, breach is not so narrowly defined. Under the UCC, breach is more generally defined.  For example, a late arrival of goods can constitute breach. Further, the late arrival of the goods need not constitute a breach in the written instrument, however, it is breach per the UCC and the standard rules.

Sellers and buyers have a duty to mitigate losses under the UCC.  If a buyer does not receive goods as agreed upon in the contract, they have a duty to mitigate the breach by “covering.” Here, the buyer will look for similar goods to replace the undelivered goods. The loss here will constitute the difference between the undelivered and the mitigated goods. Similarly, where a buyer repudiates on a contract and does not buy, the seller has a duty to sell the goods to another buyer to mitigate the losses.

UCC gap fillers come into play where there is nonconformity or nonperformance under an agreement and where the contract itself is silent on the issue.  For example, where there is no agreement on the place or location of delivery, UCC gap fillers permits the delivery to be completed at the seller’s place of business or residence. As a result, it would not constitute a breach if the contract is silent on the place of delivery and the goods are delivered to the seller’s place.

Sweeney Law, P.A. has years of experience advising clients on UCC sale of goods issues.  Fort Lauderdale business lawyer Brendan Sweeney is highly experienced in this area and is well-suited to guide you through issues of mitigation, breach and cover.  Contact us now for a consultation.