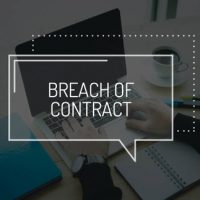 At times, breach of contract issues are born out of unclear terms in the contract. It is imperative that contract terms are clear and in proper context. Unclear contract terms can lead to miscommunication and confusion, thus resulting in an unintentional breach. If one party claims that the other has breached a contract and the other party finds no foul, there exists a scenario where both parties have fallen victim to bad contract writing. This is often the case when numbers are used in contracts. For example, if an American is contracting to provide consulting services to a US-based British company on 09/08/2017, it is wise to frame the date with much more clarity. The party from Britain may construe the date as August 9, 2017 while the US party construes the date as September 8, 2017. Thus, if performance does not occur in August, the party from Britain can conclude that a breach of contract occurred.

It is one thing to contract about the means or ways to complete performance, but it is another issue when the end result does not comport with a party’s expectations. This issue is ripe in the area of construction and real estate development transactions. This is a scenario where both the contractor and the owner agree to use a certain method of building to achieve a certain look or an end result. However, the contractor does not take into consideration the temperature or the condition of the soil on which a structure is being built. The intended outcome is not fulfilled even though the means were used. In this case, the performing party must include a warranty term and also apprise the owner of any idiosyncrasies surrounding the project.

You are permitted the advantage of the bargain in which you enter. You are also entitled to collect money stemming from any damages caused by a breach of contract. The best thing you can do is involve a seasoned attorney with experience in contract drafting. The attorney will also serve as an advisor to counsel you on foreseen legal mishaps based on pre-existing transactions.

Fort Lauderdale attorney Brendan A. Sweeney has years of experience advising and assisting individuals with their commercial transaction needs. Drafting a comprehensive contract is the most important aspect of conducting business transactions. Attorney Sweeney provides individualized advice and services to suit your needs. Contact us now for a consultation.