Are Florida Civil Theft Claims and Claims for Breach of Contract Mutually Exclusive? 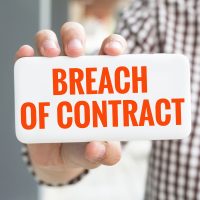 In Florida, it is permissible to allege the crime of “Theft” as a private, civil action.

A person commits theft if he or she knowingly obtains or uses, or endeavors to obtain or to use, the property of another with intent to, either temporarily or permanently:

Further, Fla. Stat. § 772.11 provides the civil remedy for theft which permits a litigant to prosecute the theft claim on their own behalf. This section is an attractive option for many potential claims because this statutory remedy provides for treble damages, however, one must be careful as the statute also requires the injured party to serve a demand letter upon the party that committed the wrongdoing. The statutory authority demands strict compliance for this letter as it is a pre-requisite for filing a claim with the court. This is done in an attempt to settle these disputes without relying on the court system, which is usually overwhelmed to begin with. If the letter goes unanswered or the demand has not been met within (30) days, it is then permissible to file a complaint.

The court in Kay v. Katzen was confronted with this issue in deciding whether a party is able to bring both claims for civil theft and breach of contract. In that case, the plaintiff was alleging breach of contract and civil theft for his employer not providing him with bonuses as per the employment contract. In the end, the court declined to entertain the claim for civil theft stating that, “[t]he claim sued upon was clearly a contractual claim, not a tort claim, and accordingly the actions for conversion, civil theft, and punitive damages did not lie.” This is not to say that it is never appropriate to bring a civil theft claim where a contractual relationship exists, however.

The court in Moore Business Forms v. Iberoamerican Electronics pointed out that the Economic Loss Rule can bar a claim for civil theft, where a contract is the basis of the claim. Under this rule, where there is a contract between the parties, and the damages alleged are economic damages based on one party not meeting the expectations of the contract, there can be no claim in tort law absent a showing of a tort independent of the breach of contract. While the court in that case found no such independent action, the court did comment on the Economic Loss Rule stating that:

The economic loss rule has not eliminated causes of action based upon torts independent of contractual breach even though there exists a breach of contract action. Where a contract exists, a tort action will lie for either intentional or negligent acts considered to be independent from acts that breached the contract. Thus, in the proper circumstance, no doubt, claims for civil theft and breach of contract can coexist.

Colonial Penn Insurance Co. v. Value Rent-A-Car, Inc. is a good example of the proper circumstances under which both claims may be successfully made. In this case, a car rental company and an insurance company contracted for a blanket insurance policy to cover the rental company’s fleet of vehicles. Pursuant to the agreement, the calculation for the premium was to be a percentage of the gross receipts per rental vehicle. The insurance company brought the claims for breach of contract and civil theft against the rental company, alleging that the rental company submitted fraudulent data regarding the gross receipts, which resulted in the insurer issuing a reimbursement on the policy’s premium. The insurer further alleged the fraudulent reports understated the actual gross receipts received per vehicle, which the insurer relied on in issuing the improper premium reimbursement.

When the rental company brought a motion to dismiss the civil theft claim, the court needed to decide whether the both claims for breach and civil theft could be brought, since after all, the claims both stem from the contractual relationship. The court ruled in favor of the insurer stating:

Florida law does not bar a civil theft claim simply because a contractual relationship is involved. Masvidal v. Ochoa, 505 So. 2d 555 (Fla. 3d DCA 1987). However, where a contractual relationship exists, the alleged loss which results from the theft, must be separate and distinct from any loss alleged to have resulted from the breach of contract. O’Donnell v. Arcoiries, Inc., 561 So. 2d 344 (Fla. 4th DCA 1990).

The court in Escudero v. Hasbun came to the same conclusion but the reasoning differs slightly as the court added additional guidance on the issue. This dispute, between an estranged husband and wife, involved a certificate of deposit (“C.D.”) with a principal amount of $60,000. Pursuant to the separation agreement, the wife was to be allocated the funds in this C.D. After the maturity date, however, the husband withdrew the funds and placed them into his own account. This prompted the wife filed an action against the husband for civil theft and sought an injunction to enjoin the husband from making further dispositions of the funds.

In appealing the granted injunction, the husband argued that the right to the funds is contractual, stemming out of the separation agreement, and therefore, a civil theft action is improper. In support of this, the husband relied on Colonial Penn and several other cases. The court took them all into consideration but stated:

We read the cases relied upon by Escudero to mean that a civil theft claim will not lie where there is a contractual dispute over an uncertain or unspecified amount of money alleged to be owed and there is not an identifiable account or piece of property from which the money is to be paid.

The court determined the damages that the wife alleged were separate and distinct, just like the other decisions, but in finding this, the court considered the facts that the monies were certain and the account was identifiable. To illustrate, if the husband just never turned the money over to the wife and left the C.D. to renew, the wife’s only recourse would be on the contract. But here, the wife showed that she was entitled to a certain amount, the value of the C.D., and that the husband took steps to misappropriate the money by withdrawing it and putting it into his own account. This approach helped the court in making the distinction between the breach and the tort.

Gersh v. Cofman was a dispute between cousins involving the disposition of several dividend checks from a company they had invested in. The plaintiff brought a civil action for theft alleging, that the defendant had misappropriated dividend checks for himself and failed to pay the plaintiff his share. The court said that this action was proper, even though the dividends were subject to a contract. The court pointed out that the plaintiff showed that he did not sign the checks and that his signature was forged. Further, it was also shown that the checks were deposited into accounts controlled by the defendant. The court found that these facts were important in establishing an “intricate sophisticated scheme of deceit and theft”; which was separate and independent from the breach of contract.

While the facts and circumstances of these cases are unique in their own ways, the courts either permitted or declined to allow civil theft actions on similar grounds. Essentially, in order to bring a civil theft action where the property in dispute is under a valid contract, the party bringing the cause must show an act and intent, that would be actionable, outside of the contract. That is, some action that goes beyond the damages that one would expect to naturally flow from a simple breach of contract. Otherwise, a claim for civil theft is not appropriate.

Brendan A. Sweeney, Esq., LL.M., of Sweeney Law, P.A., a boutique firm in Fort Lauderdale, Florida, regularly handles complex litigation that concerns civil theft claims throughout Florida. Brendan A. Sweeney, Esq., LL.M. is an AV Preeminent Martindale Rated Attorney, that has been recognized as a Florida Super Lawyer in 2020 and 2019, Florida Legal Elite in 2020 and 2019, and as a Florida Super Lawyer Rising Star in 2018, 2017, 2016, 2015, and 2014. If you have any questions and/or issues regarding civil theft claims then contact Sweeney Law, P.A. at (954) 440-3993 immediately to protect your rights.