Arbitration Clauses: Who Decides if the Dispute Goes to Arbitration? 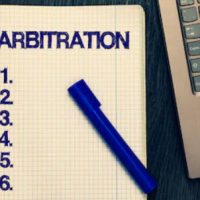 Arbitration is one type of alternative dispute resolution process that may be used to resolve conflicts outside of litigation. Many types of contracts contain clauses that provide for arbitration in the event of a contractual dispute.

Resolving a dispute by arbitration can have advantages and disadvantages. Among the advantages often associated with arbitration is the speed of dispute resolution. According to statistics provided by the American Arbitration Association, federal trial courts took an average of more than 12 months longer to get to trial than cases adjudicated by arbitration, and a total of nearly three years in court compared to nearly one year in arbitration for cases that went through the federal appeals process in court. One commonly noted disadvantage to arbitration is the lack of a formal or organized appeal process, in contrast to the traditional appellate process that exists in the court system.

Sometimes, whether a dispute is subject to a contract’s arbitration clause in the first place is itself is not entirely clear. In such a case, who decides whether the arbitration clause applies? Is it an arbitrator? Is it a judge? Recently, a Florida District Court of Appeal had occasion to consider this question in a lawsuit brought by vacation renters against the owner of a property they rented through Airbnb.

In Doe v. Natt, the plaintiffs alleged that the owner of their vacation rental secretly recorded their entire vacation stay. The plaintiffs sued the owner of the property and Airbnb, alleging several civil tort claims, including intrusion, constructive intrusion and loss of consortium. Airbnb filed a motion to compel arbitration, based on the arbitration clause contained in Airbnb’s online agreement.

The arbitration agreement at issue was contained in Airbnb’s online agreement, which was described by the court as a “clickwrap agreement.”  This popular type of agreement is one in which the contractual terms are agreed to online after the party agreeing to its terms clicks a box so indicates by clicking, “I agree.”

After a hearing on Airbnb’s motion to compel arbitration, the lower court determined that the decision of whether the dispute was subject to arbitration in the first place had to be made by an arbitrator, and not the court. The court reached this decision, in part, because it agreed with Airbnb that the clickwrap agreement’s incorporation by reference of an American Arbitration Association (AAA) rule that gave authority to the arbitrator to decide whether a matter was subject to arbitration took precedence over the court’s authority to do so.

The Florida District Court of Appeals, Second District, reversed. The appellate court found that the clickwrap agreement and the AAA rules it incorporated by reference did not provide the necessary clear and unmistakable evidence of the parties’ intent to have an arbitrator decide if a dispute was subject to arbitration in the first place.

If you have questions about arbitration clauses in rental contracts, or other contracts, contact the Fort Lauderdale business lawyers at Sweeney Law.