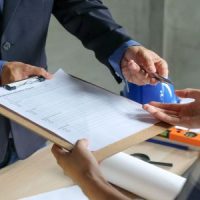 Every good thing usually has a foil, an enemy, or some opposing force working against it. The same goes for your construction contracts. If there’s one thing that is sure to create havoc, chaos, and possibly, destruction of an otherwise good construction contract, it’s ambiguity in the terms and conditions of a contract.

As a general rule, ambiguities are interpreted against the party that drafted the agreement-but that’s not always the case, and that hardly determines how a court will rule. If you have a vague or contradictory term in your contracts that creates ambiguity, you aren’t just leaving the door open to the other side to defend itself against a breach of contract case, you are also leaving the ultimate interpretation up to a judge or jury.

There are some things you can do, to try to avoid ambiguities—and thus make it less likely that your construction contract will be challenged in court.

1)      Avoid contradictions with other documents (contracts) – Construction projects can involve a lot of different contracts, for different parts of a project, with different subcontractors or workers. All of those agreements can easily end up contradicting each other, if you aren’t careful.

2)      Avoid open or subjective terms – In construction it is common to say something like a project must be completed “to satisfaction” or something must “match,” or to use other terms that have no tangible, substantive interpretation. These kinds of subjective terms open the door to controversy and challenges.

3)      Watch your amendments – Amendments to contracts, or agreements made later on like alterations or addenda, can create conflict and ambiguity when they conflict with terms in the original agreement

4)      Look for dual meanings – A lot of words are used in “common English,” that may have very construction-industry specific meanings. When you use words that are specific to your industry, you need to make sure that you clarify what you mean, if the word or phrase may be subject to two interpretations.

5)      Use definitions – You can certainly use part of your agreements to define terms that you are concerned may be vague or where you want the terms to have a specific meaning.

Will all of these guarantee that nobody ever alleges that your contract is ambiguous? Likely not—anybody can allege anything, and they often do when they are sued for breach of contract. However, these are things that can help ensure your success in court, if you need to sue to enforce your agreements.

Our Fort Lauderdale construction attorneys at Sweeney Law P.A. at 954 440-3993 can help you draft contracts that will help you if you have legal problems down the road.